After a very early start from Manchester on Saturday morning, we had a very good flight to Frankfurt and a great day with the Leica Forum gang in Wetzlar. There were around 40 of us at dinner and 39 entries into the Challenge, the best turn out ever. So good to see so many old friends and lots of new ones too. A really good day.

Having collected the car from the airport, we quickly found out that the voice on the sat nav would give us directions – in Portuguese. This wasn’t very helpful, to be honest, but we finally managed to get it set to English on Sunday night, with the help of a contact in America. Go figure, as I’m sure he would say.

Drove down the autobahn (avoiding getting a 150mph Audi A7 in my boot by a judicious application of getting back into the middle lane where I belonged…) to Nurnburg and had a very good walk around the city. Driving at about 120mph is OK for a short while, but you really do need to have your wits about you and there’s no way you could drive like that all day.

Anyway, the city is a really lovely place and the weather was beautiful. 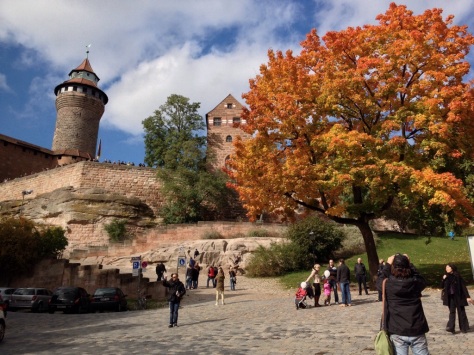 We also called into see the Nazi parade ground on our way out of the city. I wanted to see if it was a big as it looks on the old newsreels and unfortunately, it is. Some of it is now football pitches, but much of the main-stage area ( as it were) remains intact.

I have to say that I was particularly depressed to be able to take a photograph such as this one, but I wasn’t surprised.

Now, having had dinner served by a lady in traditional Bavarian dress ( which I’m sure she wears to the shops too ), we are looking forward to a leisurely drive tomorrow further south to the Bavarian Alps.

Germany is very good value, by the way. Very good. And full of nice people.